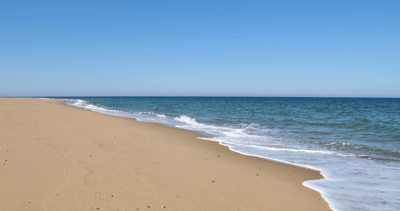 With beautiful beaches on both the north and south sides of town, it's no wonder that so many tourists make Dennis their vacation destination.

There are eight beaches on Cape Cod Bay and another eight on Nantucket Sound. If you prefer freshwater swimming, Scargo Lake offers two beaches. Residents pay $17 for each parking permit while non-residents pay $150 for the season. A seasonal pass can be purchased at $115 for those who can produce a rental lease for four or more weeks. Weekly stickers run $34 while daily parking fees cost $10. Stickers can be obtained at the Dennis Town Offices on Main Street in South Dennis at (508) 394-8300.

Chapin Beach on Chapin Beach Road at the northwest corner of Dennis is a favorite among owners of four-wheel-drive vehicles. At low tide, those looking for shellfish will delight in being able to walk more than a mile out on the tidal flats of Cape Cod Bay. The beach has no lifeguards and no restrooms, but portable toilets are available. Across the water is Yarmouth's Bass Hole and Gray's Beach.

Also on Cape Cod Bay is Mayflower Beach at the end of Beach Street. In addition to restrooms and concessions, this beach features a boardwalk that stretches from the large parking lot over the dunes to the beach below. Mayflower Beach is staffed with lifeguards.

Bayview Beach at the end of Bayview Road is a residents-only beach. Though there is a boardwalk leading to the beach, there are no restrooms or concession stands, but lifeguards are on duty.

Crescent-shaped Corporation Beach, off Corporation Road and hugging Cape Cod Bay, is a popular spot on hot summer days. The curve of the beach forms a tidal pool that's perfect for children. Corporation Beach has lifeguards, a concession stand, restrooms, showers, and even a swing set for children set on a bluff overlooking the bay.

Howes Beach is a small public beach off Howes Street, just east of Corporation Beach. Howes has a boardwalk and lifeguards but no restrooms or concessions.

The last public beach on the north side is Sea Street Beach at the end of Sea Street in Quivet (East Dennis). There is a boardwalk leading to the beach, as well as lifeguards and portable toilets but no concession stands.

Sea Street Beach at the end of Sea Street in Dennisport is perhaps a half-mile east of Glendon Beach. Like Glendon and Haigis, the Nantucket Sound waters here are warm and the beaches are marked with rock jetties. Sea Street Beach has restroom facilities, concessions, and lifeguards on duty.

There is perhaps no more popular Mid-Cape beach than West Dennis Beach, off Davis Beach Road in West Dennis. Situated on a narrow patch of sand on Nantucket Sound just east of the mouth of Bass River, the beach stretches for more than a mile. Beachgoers begin to arrive here by 10 AM, but since the parking lot has room for more than 1,000 cars, you'll rarely have to worry about finding a space. The eastern end of the beach is reserved for Dennis residents; the western end, however, is less crowded and open to everyone. A well-equipped snack bar concession, restrooms, and showers provide all the comforts while 10 lifeguard stations make this a safe, secure haven. At the beach is the Old Bass River lighthouse.

About three-quarters of a mile east of West Dennis Beach is South Village Beach by the mouth of Swan River. South Village has parking for both residents and nonresidents. Toilet facilities and lifeguards are on site, but there are no concession stands.

Two East Dennis residents-only beaches are on each side of Sesuit Harbor. On the west side is Harborview Beach, which has no facilities, although a lifeguard is present. Cold Storage Beach on the east side of the harbor has restrooms and lifeguards but no concession stands.

A number of Dennisport beaches are available for the visitors who rent cottages in this south side village. Haigis Beach lies where Ocean Drive meets Old Wharf Road. Lifeguards are on duty and toilet facilities are available. There are no concession stands but there is a small store right across the street from the beach.

Further down Old Wharf Road is Glendon Beach opposite Glendon Road. Like Haigis, Glendon has lifeguards and toilet facilities. Again, there are no concession stands although a small store is just a short walk away.

The next two beaches do not have lifeguards, restrooms, or concessions, and both have parking by sticker only. Raycroft Beach is at the end of the short Raycroft Parkway off Old Wharf Road. To the east about a couple of hundred yards is Depot Street Beach at the end of (you guessed it) Depot Street.

At the end of Inman Street off Chase Avenue is the final saltwater beach in Dennisport. Flanked by motels with private beaches on either side up and down the popular Chase Avenue, Inman is a public beach that offers toilet facilities but no concessions. Lifeguards keep tabs on what's going on out in the water.

Scargo Lake is a 50-plus-acre freshwater sandy-bottomed kettle hole--nearly 50 feet deep--nestled at the bottom of Scargo Hill. The lake is home to two popular beaches: Princess

Beach, off Scargo Hill Road, and Scargo Beach, off Mass. Rt. 6A. PrincessBeach has restrooms and a picnic area as well as lifeguards. Scargo Beach, narrow and tree-lined, also has toilet facilities and a lifeguard.

Log in to see your saved listings or edit your searches:

No account? Sign up now to save searches, listings, and get tailored listing notifications. It's free, opt-out anytime.

© 2020 Cape Real Estate, LLC. All rights reserved. ERA® and the ERA Logo are registered service marks owned by ERA Franchise Systems LLC. Cape Real Estate, LLC fully supports the principles of the Fair Housing Act and the Equal Opportunity Act. Each franchise is independently owned and operated. Any services or products provided by independently owned and operated franchisees are not provided by, affiliated with or related to ERA Franchise Systems LLC nor any of its affiliated companies.